Hello Friends!  This dish was inspired by my cousin Tyler.  I go back to Nebraska each fall to go hunting with family, and they have a long tradition of utilizing nature's bounty for food.  One afternoon, as I was returning to our camp after a bone chilling morning of hunting in Thody Woods, Tyler was already there, and I knew he was up to cooking something real good.

Like a bloodhound, my nose followed a trail of wonderful aromas, trying to sniff out what he had concocted in his pot.  When I asked Tyler what it was, he said that he had thrown together some canned potatoes and venison ring bologna, followed with a dash of pepper.  I laid my rifle and pack down, and scooped a bowlful of this hot, warming soup.  Needless to say, it really hit the spot on that cold fall day in Nebraska.

Thinking back, it was wonderful the way it was, but I began toying with what else could go in there.  The following is what I came up with, brought to you after a challenging hike to Bridge to Nowhere on Memorial Day.  And it turned out just as good as Tyler's.  Thanks Ty! -Rick

Note: This recipe is ideal for camping because it is quick and easy. The ingredients here are basic, but feel free to add in whatever else you like. The key is the ring bologna, which adds dynamite flavor. We recommend doing the prep work before you hit the trails and storing in a cooler. That way, all you have to do is throw ingredients together at the end of the day. I don't know about you, but the last thing we want to do after a long day of hunting or hiking is waiting hours for a hot meal.

Servings: 6
Cooking time: About 30 minutes
Ingredients:
- 8 cups water
- 2 cups beef broth
- 1- 8 oz package of button mushrooms, sliced
*Before you leave for your outing, clean the mushrooms with a brush or damp towel. DO NOT stick them in water. Mushrooms are made mostly of water and act like sponges. Slice them and store in a dry, zip-lock bag.

-1 cup of celery, cut up into pieces and blanched
* You can blanch celery ahead of time to cut down cooking time while out in the field. You can store in a zip-lock bag and freeze for later use.
-1/2 tbs. garlic salt
- 1-1/2 to 2 lbs. deer ring bologna, sliced
- 2 (14.5 oz) cans of sliced potatoes; or whole, if you can't find sliced
- 1/8 cup fresh Italian flat-leaf parsley, chopped 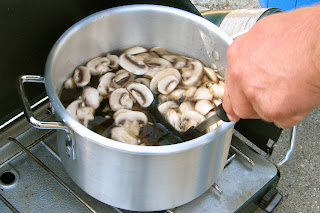 1. In a medium sized pot, bring water and beef stock to a boil. Cover pot for faster boiling. 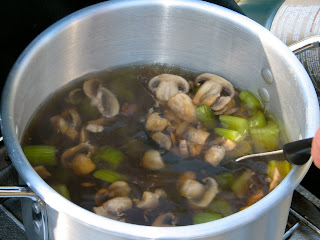 3. Cover and simmer for about 10 minutes, or until the mushrooms start to turn brown. The mushrooms will shrink in size and look darker in color. 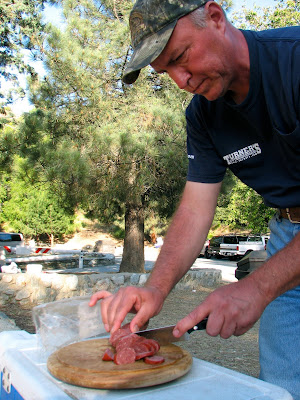 4. In the meantime, slice the deer ring bologna into bite-sized pieces.

*Note the redness on Rick's face. No, it's not because he's camera shy...

This is what happens to stubborn men who think they're too macho for sunscreen. And who gets to hear about it? We women do. :-P 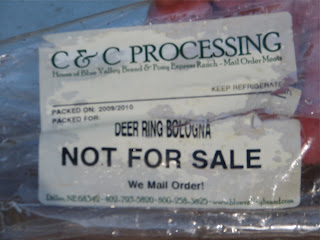 If you don't know what ring bologna is, here's what the packaging looks like. It basically looks like a long sausage link. 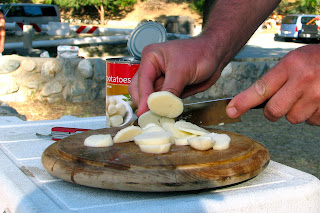 5. Slice your canned potatoes. If your potatoes are already sliced, then that's one less thing to worry about. These canned potatoes work great because they're already cooked. Sometimes, potatoes just take forever to cook. 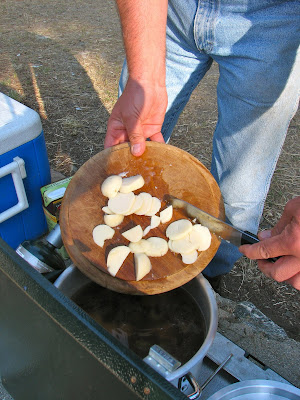 6. Add potatoes and ring bologna into the pot. Simmer for 15 minutes. 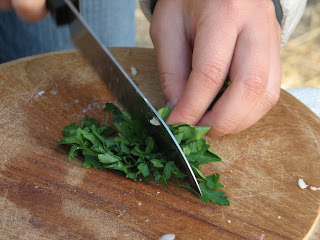 7. After 15 minutes, chop up the parsley and add into your soup.

8. Ladle into bowls and serve this delicious soup to your fellow hunters and campers!


Well, there you have it! We're still working on it, but check back and take a look-sy into our "Latest Adventures" page. We will post up photos of our recent outing. This month, it will be the Bridge to Nowhere Hike. We had a blast! Came home soaking wet from all the river and stream crossings.


Please let us know what you think about this recipe by leaving comments. Just click on the red "comments" button below and it will lead you to a form. We value your feedback. Thanks!
Like Food for Hunters on Facebook!