We know this is long overdue. It's been weeks after our return from Nebraska, and we have barely uttered one word about it. The thing is, Nebraska’s not like Disneyland. It was a kind of fun that takes awhile to digest.
*** 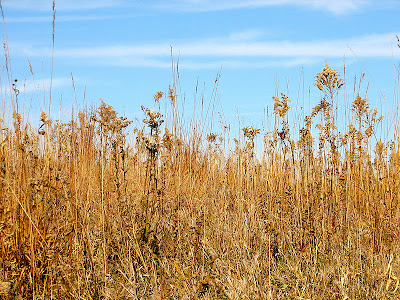 There’s something about the country that is so appealing. It has an unassuming beauty that is often overlooked, drowned out by the illusions of city lights and sounds. It is a place where at any given moment, the most you’ll likely hear is the sound of a truck driving down an old dirt road, or a cow mooing in the distance. It is a land of big blue skies and tall grasses, of combine tractors and corn. 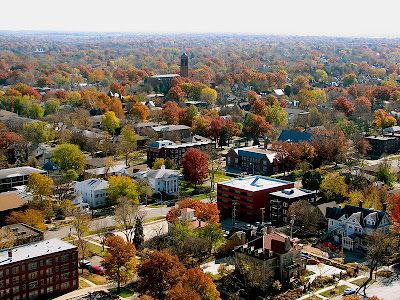 Trees line up along small-town streets, shading the homes of some of the nicest people you’ll ever meet, in hues of orange and green, red and gold.
We arrived in Nebraska on a Thursday, two days before the rifle opener. Rick’s cousin Pete pulled up in his Chevy Truck, jumped out and gave Rick a familiar hug hello. Then he turned to me and said, “If you’re gonna hang out with the family this weekend, you better get used to hugs too!” From that moment on, I knew the week was going to turn out great. 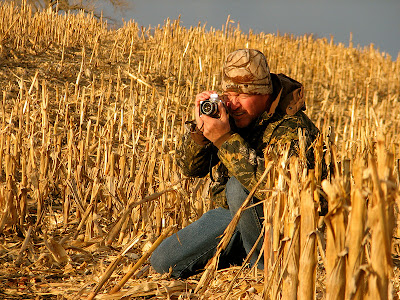 We loaded up, and I saw Rick smile in the side-view mirror – the kind of smile that was just for himself, private and satisfying. I knew he felt like he was finally home.
On the way to the house, we saw about fifteen does in a single field. Down one road, we caught another one trying to cross. She was beautiful, with her soft tan coat, and large ears that were darkly rimmed with a deep stunning brown– not typical of whitetail deer in Lancaster County. 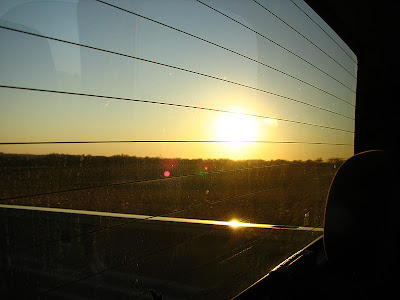 So this was the country. And I soaked up every part of it. My favorite moments were actually just riding in the back of Pete and Tyler’s truck, just to watch the dust stir up and settle back down again. Rick’s cousins knew how to show a couple Californians a good time. 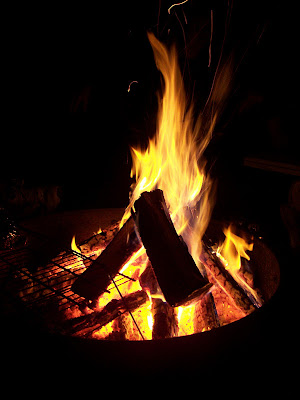 Deer Camp was different this year, so I was told. For the first time ever, the men invited the women out, to celebrate the night prior to the big day. We had so much food… Tyler’s delicious pheasant soup, Pete’s bacon wrapped venison steaks and Brian’s deer chili. 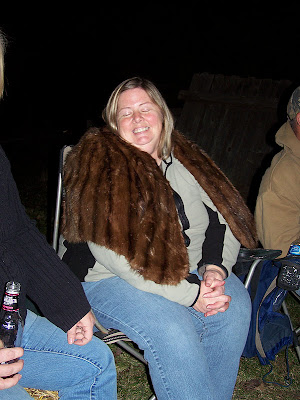 I talked and mingled with the wives, from whom I learned that kindness and a sense of humor will allow any woman to put up with a crazy hunting man. We warmed up by the fire and laughed the night away. Colton, Rick’s youngest cousin and Pete’s son, suddenly said, “I don’t think books have ever been talked about at deer camp before.” That made everyone laugh. The men said that “things are changing,” and they didn’t seem to mind. 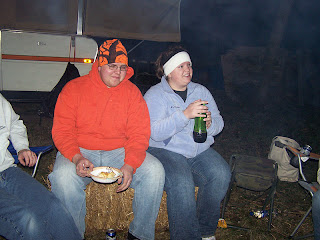 Then all the women left, except me. Tomorrow was the opener, so all those hunting had better get some sleep. Rick and I would be hunting with Tyler and his son Joseph on the Thody property, a beautiful 10-acre piece of woods that Tyler’s parents have had for years. 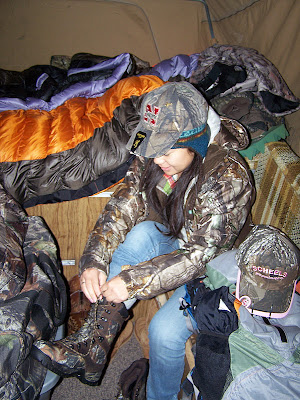 Rick and I woke up early that next morning. I quickly threw on my camo bibs, gloves, my camo hunting jacket, camo boots and orange vest—things that I had been shopping for and accumulating for months before the hunt. Rick made sure that I had enough clothes, because I’m a girl and I generally don’t do well in cold weather. I had so much clothes on that I almost waddled to our blind. 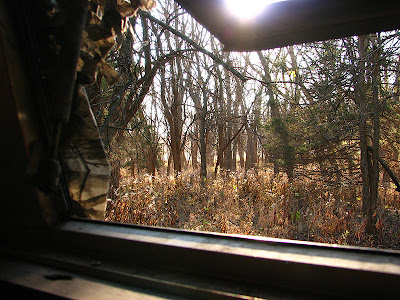 All was quiet as we slipped into our spot, which was comfortable. Tyler worked hard that summer before, ingeniously turning the cover to his old truck into a practical deer blind.

The clock said 6:30 AM. It is time to shoot. A few moments later, the sound of gunshots scattered throughout the land. It’s officially deer season!! I waited with my .243 Howa rifle and watched for any movement in the woods. I honestly had no idea what to expect, being my first deer hunt. I didn't know where the deer would be. When they’ll show up. Or if at all. But I was ready, and I was anxious. I was so afraid of making a bad shot, wounding the animal or ruining good meat. 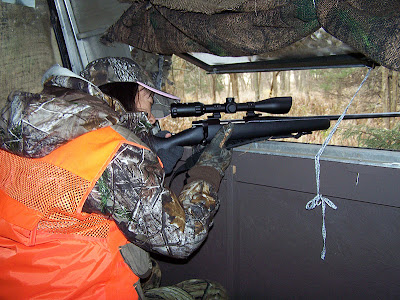 Suddenly, a doe walked into the corner of my eye. It had only been thirty minutes. “There’s a doe!!!” I whispered to Rick. I watched her walk through the trees, making her way up the dry creek bed, and I steadied myself for a shot, if I was given one. She stopped, and bent down to eat. Her head and neck were hidden behind a tree. Rick whispered, “Take your time—” BANG! Before he knew it, I had already squeezed the trigger. She was standing about 25 to 30 yards away. It all happened so quickly that I don’t remember feeling my heart beat.

Her tail went up immediately and started flickering wildly. She trotted forward, seeming a little confused, then ran off behind some trees. I thought I saw her bed down, but I wasn’t sure. I prayed that I had not injured her, only to have her sneak away for a slow and painful death. Rick’s phone buzzed. It was Tyler, who was hanging out up high in a tree stand at the other end of the property. He wrote, “That sounded like a .243.” Tyler knew it was me. That made me more nervous, because the pressure was on. 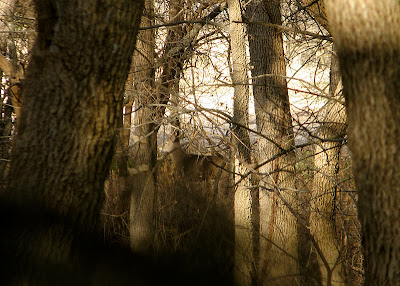 We waited, and saw about 5 or 6 more deer walk through the woods. Unfortunately, they were too deep into the woods to shoot, and too close to the other property on the other side. But they were looking at something, stopping and sniffing where I thought my doe had fallen. That made us both hopeful. I was so anxious to go out and find my deer.

A few hours later, Rick and I headed back to camp. Tyler and Joseph were there, waiting for us. “Let’s go find a deer,” Tyler said. We unloaded our guns and walked back out into the brush, across the creek and through the trees. Rick walked ahead and then he stopped. He looked back at me and smiled, motioning me to walk up. I came into a small clearing and found my doe lying there, nestled in a bed of brown fallen leaves. I didn’t say anything. I just slowly bent down and silently ran my hands through her thick, soft coat. I felt the warmth of her body through my fingers. 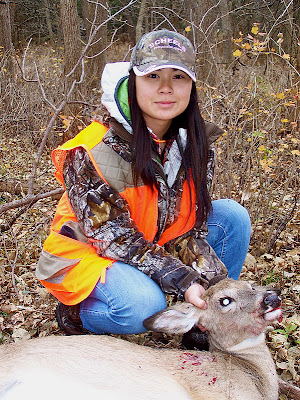 “Well, dear, you did it” Rick said, proudly. “How do you feel?” I thought for a moment, but all I could blurt out was something lame like “happy” or “glad.” Writing this now, I am more aware of how I felt. But my mind went completely blank then, while I was kneeling right beside her. At  that moment, I didn’t feel like jumping up and down, because for me, that kill was private and personal. I quietly rubbed my doe’s ears and thanked her for what she had given me. Tyler shook my hand. It’s one of those moments that you never forget. 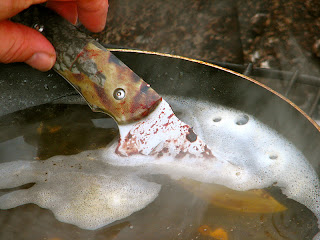 Thank you Joseph for helping me field dress my deer. :-) 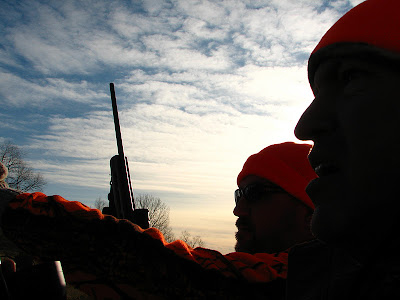 One day at camp, Tyler and I waited by the fire for Rick to come back from his hunt. Tyler said to me, “It’s not about killing stuff. It’s about all this.” He looked around at the tent trailer and the fire; the trees and skies that surrounded us; the cool brisk air and our deer hanging by the tree, to be enjoyed by family friends for the year to come. I have Tyler to thank for showing me the true spirit of hunting. It's a tradition and a culture, one that I am honored to be a part of. 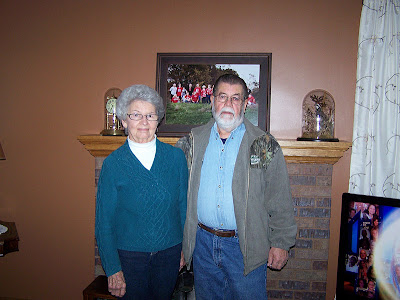 I want to thank the Brown family and the Thodys for putting up with us that week. Thank you Jo Ann and Keith for welcoming us so warmly that first day we landed in Nebraska. They made homemade chicken and noodles and mashed potatoes, cherry pie, breads and so many other goodies that I can’t even remember them all. On our last night, they made warm mac and cheese and fried fish, which was one of the best meals we have EVER eaten. If you look up the word "hospitality" in the dictionary, this picture will show up. 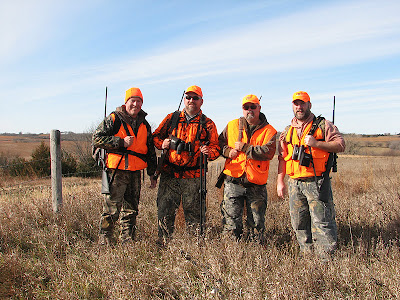 Thank you Pete Brown, their son, who took us back and forth from the airport, and for being such a hoot the entire week. Thank you to the rest of the boys who hunted with us and to Norm, a local farmer, for allowing us to hunt his land. 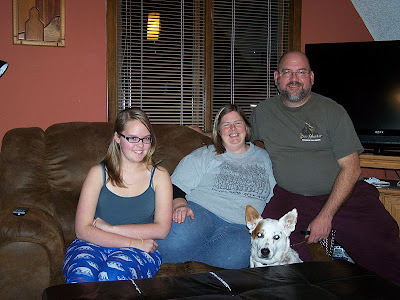 Tyler and Chris Thody, who allowed us to stay with them, and who took such good care of us in the field and at their home. We love and miss you all! 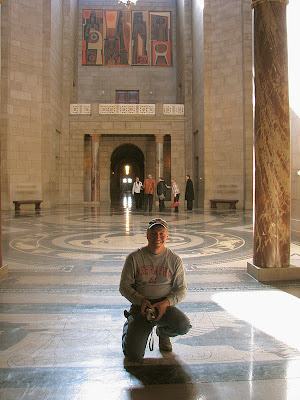 Last but not least, I want to thank Rick, who has been so supportive and loving. Thank you for opening up my eyes to a whole new world. I have so much fun being outside with you. Here’s to many more years of hunting! Baby, I love you!