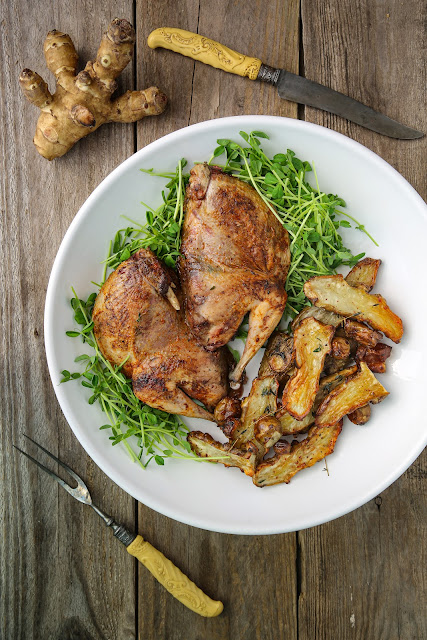 Sharp-tailed grouse and sunchokes are both foods of the Great Plains. Native Americans and early settlers relied on this upland bird for meat, and historically, indigenous peoples of North America cultivated Helianthus tuberosus as a form of carbohydrate in their diets. The sunchoke is the starchy, edible tuber of this sunflower species. Its high sugar content makes it a beautiful candidate for roasting, turning golden-crispy on the outside and creamy, tender on the inside.

While I can’t say for sure how Native and early Americans might’ve prepared these two ingredients, I like to think that on some fall night by some campfire, some many moons ago, this upland bird and the potato-like tuber were enjoyed on the same “plate.” It’s a match made upland: dark, richly-flavored sharptail begs for the sweet, nuttiness of roasted sunchokes. Plucked and cooked whole, there’s something about a perfectly roasted bird that is so simple yet splendid. It’s even more special when the bird was wild and hunted.

Note on sunchokes: Sunchokes may be grown in a garden, foraged or purchased. They contain a starchy substance called inulin, which may be difficult for some people to digest. If you’ve never had sunchokes before, enjoy it sparingly at first.
Servings: 2-3
Prep Time: 1 hour
Cooking Time: 30 minutes
Ingredients:
- 2 whole sharp-tailed grouse, skin on
- Kosher salt, to taste
- Half a small onion
- Paprika, to taste
- Freshly cracked pepper, to taste
- 1-2 tablespoons of olive oil, separated
- 1 pound of sunchokes (also called Jerusalem artichokes)
- 6 sprigs of fresh thyme
- Salad greens and dressing, your favorite
Special equipment: kitchen twine, optional


1. Prior to cooking, take grouse out of the refrigerator and generously sprinkle kosher salt inside and outside the birds. Allow them to sit at room temperature for 1 hour. Meanwhile, move one of your oven racks to the upper third and another to the middle. Preheat oven to 450 degrees Fahrenheit and allow it to warm up for at least 30 minutes before cooking.

2. Wash sunchokes, trim off discolored ends and cut them in half lengthwise. In a rimmed cookie sheet, toss the sunchokes with olive oil, salt, pepper and thyme sprigs. Set aside.

3. Ten minutes prior to cooking the birds, place the empty skillet or baking pan you plan to use in the preheated oven. Cut onion to fit and stuff inside each grouse. For more even cooking, truss the birds with kitchen twine.

4. Just before roasting, pat birds dry with paper towels, coat with a thin layer of olive oil and evenly sprinkle paprika all over. Place birds into the preheated skillet/baking pan breast-side up and set on the upper rack. Place the sunchokes on the middle rack. Roast the birds for 10-15 minutes or until the breast reads 130-135 degrees Fahrenheit. Next, take them out of the oven and sear the breasts and sides in a screaming hot, greased skillet for color. Finally, remove birds from heat and allow to rest for 5-10 minutes before serving. Shoot for a finishing temperature between 140-145 degrees in the thickest part of the breasts.

5. Meanwhile, roast the sunchokes for a total of 20-30 minutes or until tender and golden at the edges. Flip them halfway through. Serve birds whole, split in half or quartered with the roasted sunchokes and a light vinegary salad.