Chipotle Chili with Venison and Cactus A guest recipe! We love guest recipes (hint, hint)! Thank you to Marie Luther and her son Ian from Primitive Archer Magazine for sending us this great recipe! Marie and Ian won a chili cook-off with this recipe at their church in Tennessee, so you know it's good!

Featuring lots of dried and fresh chiles, this chili is smokey on the front-side with a kick on the back-side. But their secret is molasses, carrot juice, cinnamon and red wine, which sets off their chili from most. To add a Mexican flare, cactus (nopales) were also incorporated into the chili. However, we did make a few changes based on our own taste and what we were able to find. If you want to try the original recipe, we've included it at the end of this post. Well done, Marie and Ian!


About Marie Luther
Originally from Texas, Marie now resides in Tennessee where she works for Primitive Archer Magazine. She grew up with hunting all her life, having grown up eating game like venison and dove. Marie fondly recalls her father smoking a wild turkey every Thanksgiving and Christmas. She is now a single mother of 3 kids. Sadly, Marie's youngest daughter was diagnosed with Type 1 Diabetes when she was 5 years old. In response, Marie and her kids are overcoming this challenge by finding new ways to cook healthy, low-carb meals that they all can enjoy. This is what Marie has to say about cooking with her kids:

"Experimenting in the kitchen is so much fun for all of us. My middle daughter spent all last Saturday evening with her boyfriend creating chocolate truffles with sugar wings and they had to learn how to boil sugar and the different settings on the candy thermometer.

"My son Ian is a senior in High School. I hope when he goes off to college (which looks like it will be in Texas but the final decision hasn't been made yet) he has a few recipes he can cook.  Some by just making it up and some by following a recipe.  He encouraged me to enter the cook off so I made him my partner and we entered as a team.  He is fun to cook with and has always been willing to try new things." 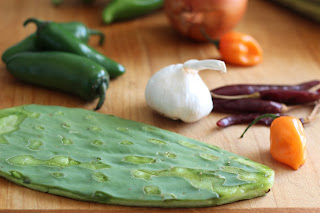 The front item is the nopales vegetable from the prickly pear cactus. It's very popular in Mexican cuisine-- something Rick grew up eating. You can easily find cactus, cleaned and ready to cook, at your neighborhood Mexican supermarket. A tad slimy, it's reminiscent of cooking with okra. 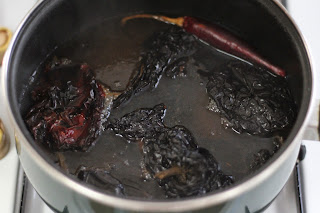 1. Over medium heat, simmer dried peppers (puya and ancho) in 5 cups of water for 30 minutes. Take off heat. 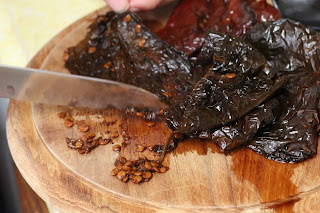 Then remove hydrated peppers from water and discard seeds and stems. Do not discard water. Careful, it will be hot. 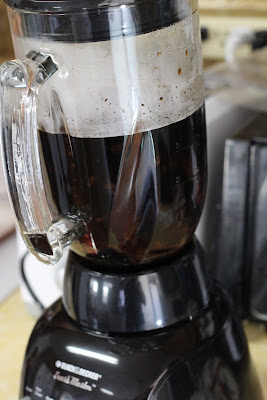 Place the cleaned pepper flesh in a blender along with 4 cups of the cooking water. Add half of the fresh habenaro pepper and 3 canned chipotle peppers. Blend until smooth. Set aside. 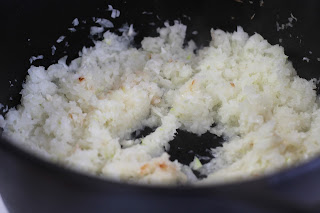 2. In a large pot, heat 1 tbs. of oil over medium heat. Saute chopped onion until soft and translucent, about 2 minutes. Then add 4-5 cloves of crushed garlic into the pot. Saute for another 30 seconds. Make sure you use a large pot. As you will see in our pictures, we had to switch pots halfway through after realizing that we we had was too small. Remove onion/garlic to a bowl and set aside. 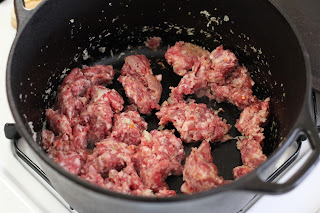 3. Brown the ground sausage. Then remove and set aside. 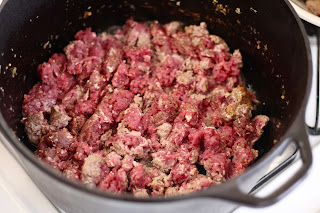 5. Once venison is browned, return the cooked sausage and onion to the pot. Add diced Anaheim chile, diced Jalapeno, 1 tbs. of basil and 1 tbs. of oregano. Mix well over a medium flame. 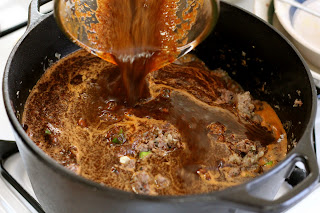 6. Then mix in the blended peppers from step 1. 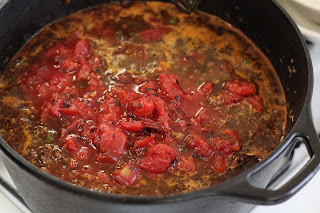 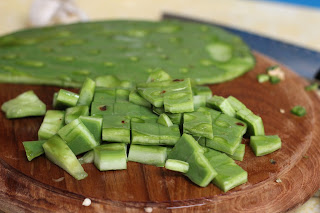 And then the diced cactus. 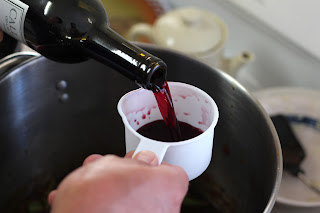 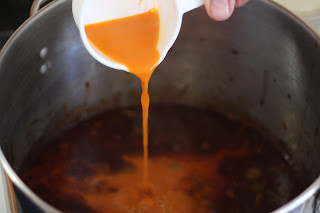 A cup of carrot juice. 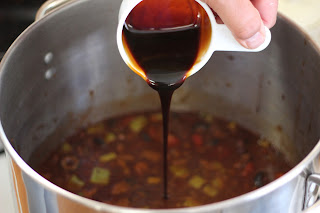 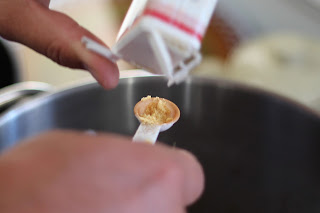 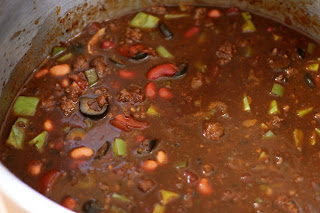 9. Then simmer uncovered until chili reduces to desired thickness. We simmered ours for 2-3 hours, to give the ingredients enough time to "marry." Stir occasionally to keep the bottom from burning. 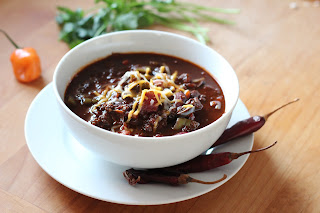 Serve with crackers or cornbread. Yum!! We hope you all enjoy this recipe. It's different from any chili we've had before.

Instructions
For Chili Sauce (pre-make this before the sauté)
Fill a sauce pan with 8 cups of water. Take your assembled dried peppers and place them in the sauce pan with the water. Put the pan on the stove and simmer it over medium heat for 30 minutes. After the allotted time, take the pan off, and carefully separate the now hydrated peppers from the water (do not dispose of the water). Take out a blender, and put about 4 cups worth of the water used to hydrate the peppers into the blender. Carefully cut open the peppers, and remove the stems, and the seeds from the pepper. Place the peppers in the blender, and then add one can of the chipotle peppers. Blend the mixture until it becomes a smooth paste. Put the paste aside.
Take a stock pot, and put 1 tbsp of olive oil into it, and heat the pot over medium heat. Finely chop 2 onions, and sauté them in the olive oil. A 4 to 5 cloves of crushed garlic to the stock pot, along with about 1lb of ground beef and ½ a pound of Italian sausage. Stir frequently till the meat has browned. While stirring, add 1 tbsp of albahaca spice, and 1 tbsp of oregano spice. Cut and seed one larger pablano pepper as well, and put it into the pot. Once it is well heated, drain the stock pot of any liquids. Slice, and seed 2 Anaheim Chile peppers, 3 jalapeno peppers, and sauté these ingredients within the mixture over a medium flame.
Once well mixed, add the chili sauce to the saute, and mix thoroughly. While stirring, add 1 can of fire roasted diced tomatoes, ½ a cup of minced pimento olives, ½ a cup of chopped garlic onions,  ½ a cup of black olives, a can of fire roasted crushed tomatoes, 2 cups of tender cactus, and 3 cans of tri-bean blend (make sure the beans have been drained of liquids). Also add 2 cups of California red wine, 1 cup of carrot juice, 2 tsp of salt, 1 cup of molasses, ½ tsp of pepper, ½ tsp of cinnamon, and ½ a tsp of dry mustard.
Labels: American Mexican Soup Venison