Ladies of the Woods

In this special post, we thought it would be a great idea to celebrate the women who hunt and shoot. Oftentimes, hunting is seen as a male dominated sport, but by the photos and stories below, we'll prove to you that it's not. For many, hunting is a family oriented tradition that's passed down from generation to generation. As you will read, these ladies can work and play just as hard as the boys. Here are a few interesting statistics:
* Women hunters are the fastest growing group in hunting. Numbers have increased 36% since 2011.
* 61% of gun stores in the United States reported an increase of female customers in 2010.
* In 2009, 2.9 million women bought hunting licenses, spending 70.6 million dollars in the process (which goes towards wildlife conservation).
Everyone, take a wife, daughter, girlfriend, FRIEND out shooting and/or hunting this year.   You will gain a life long companion and increase our hunter numbers manifold.  We need to stop the number of hunters leaving the sport for various reasons.  Dropping numbers of hunting licenses hurts our wildlife in general as no other group conserves our wild places like we hunters do.  I am happy to have Jen in my life to share my favorite places with.  It brings us closer together to spend special moments that we both enjoy out in the field.
Thank you to all those ladies, husbands and fathers who contributed photos and stories of themselves or the amazing women in their lives. There were some guys who sent us photos,too, but sorry, it's ladies day! We will get you guys in next time.
- Rick

P.S. If you misspelled anything, please send us an email or a comment and we will get it fixed ASAP. We apologize in advance.
Amy Stinnett, Montana
"My Dad is a hunter but I didn't get into it 'til I met my husband over 12 years ago. That's a one-horned muley, using a Benelli .30-06. I made a clean neck shot. I need food in the freezer to feed my 3 children. Not only is beef getting way too expensive but now there's the risk of dealing with what's in it...pink slime, e. coli, meat glue....No thanks.
I've killed deer, a bear and antelope. I'll hunt anything I can get a tag for. Got my name in the moose lottery this year. Our hounds are excellent for running cats so I'll get a cougar tag also. Hopefully, I'll be able to get out for some wolf hunting." 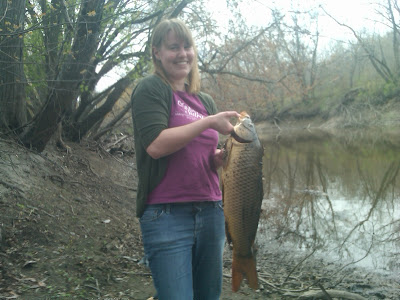 Angela Cavalier, Minnesota
"I know it said shooting or hunting but I don't have any pictures of those yet. I do go shooting regularly. I started a year ago and have been in two leagues. I went fishing for the first time in 20 years and this was the first fish I caught: A giant carp! I was so happy that I was able to reel it in. Doesn't matter how ugly it is. Twenty years and my first fish was awesome." 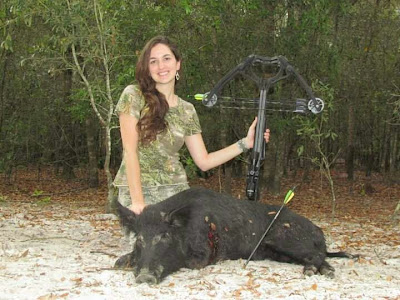 Beka Garris, New Jersey
Beka lives to hunt. She went to Florida this April to harvest her very first hog. 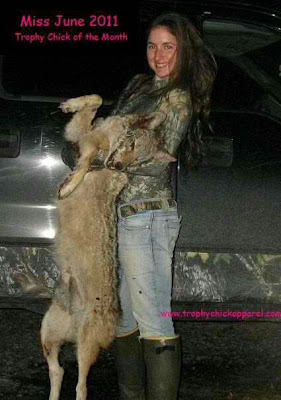 She also shot her first coyote several years ago. 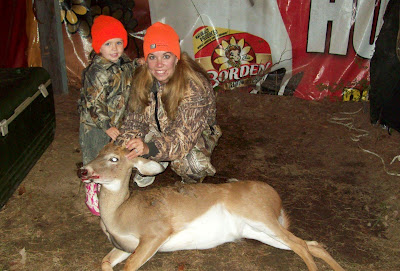 Bobbie Dugas, Louisiana
"My daughter Falyn was in the stand with me when I shot this spike. She loves hunting with mom!! Best mother daughter time spent together." 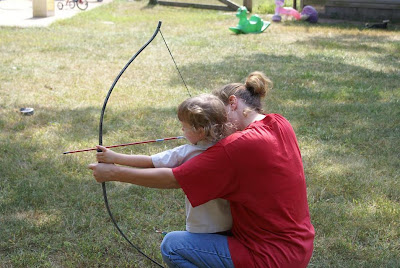 John Keith, Michigan
"Picture of the girls in my life: my wife Kerry B. Keith and our daughter shooting her bow." 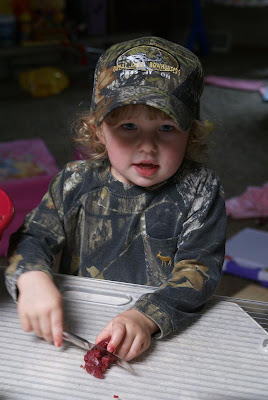 "My daughter, Amanda, helping me cut up a deer last fall. She was almost 3 at the time. She is very eager to go hunting, fishing and do anything outdoors. In fact, she went on her first bow hunt last fall with me." 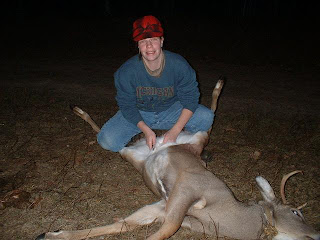 "I can't find a posed picture of my wife Kerry and any of her deer. So I had to settle on this picture of her starting the dirty work on her 2007 Michigan buck. She is a long time hunter, born and raised in the UP of Michigan. She's not afraid of any part of the process, knows how to shoot, hunt, gut, butcher, and cook it up. I will admit she can shoot better than me and has shot more deer than me. I love this woman!" 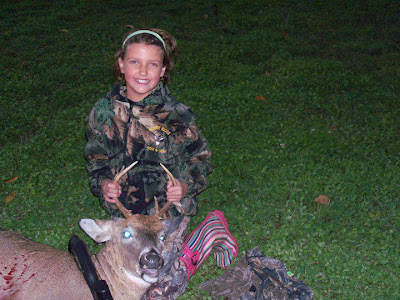 Paul Rearick,
Western Pennsylvania, Armstrong County
"My daughter Danielle Kunst at age 9 with her first ever whitetail harvest, a 6 point taken with her crossbow. Could anyone look any happier? Honestly, I'm not sure which one of us was more excited!" Dawn Freeland
Baily, Michigan
"I have been hunting for about 15 years and love it so much that I wanted to find other women who felt the same way. I started Women Hunt Too! Encouraging and empowering women in the great outdoors is what it's all about!!" 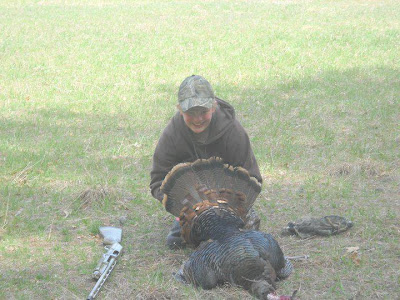 Emily Butler
Peshtigo, Wisconsin
"I know this isn't a huge turkey but it was my first turkey. Jake at 17.5 lbs. I got into hunting when my dad took me out at age 2 into the deer stand, and I have been hunting everything ever since!" 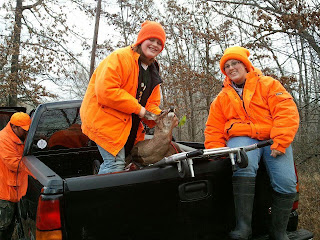 "This is a picture of me and my sister Becky Butler. I'm on the left and this is the first deer I killed, a nubby. We were doing a deer drive on Sunday of opening weekend in Peshitgo, WI. I shot it with my 20 gauge Remington 870." 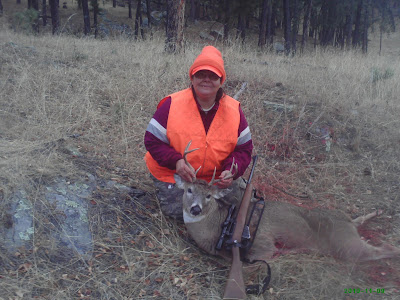 Marie Husnick, South Dakota
"I not only hunt, I process every animal we harvest on my kitchen table. I field dress, skin, quarter, bone, trim, grind, can and make breakfast sausage, summer sausage, brats, venison bologna and anything else I can think of. I hunt whitetail, mule deer, turkey and pronghorn with rifle, shotgun, bow and muzzle-loader." 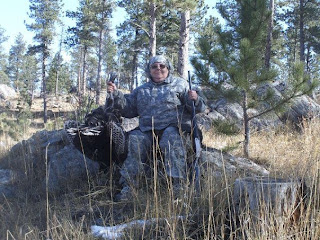 "Here I am with a nice Merriams turkey that I shot on my 50th birthday. Notice the camo, it is army digital camo and works well here in the Black Hills of South Dakota." 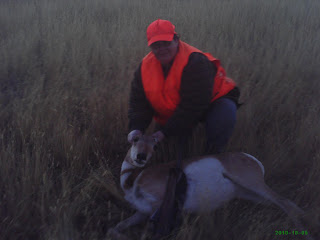 "My first pronghorn In South Dakota, close to the Wyoming border. I will be going on my first archery pronghorn hunt this year." 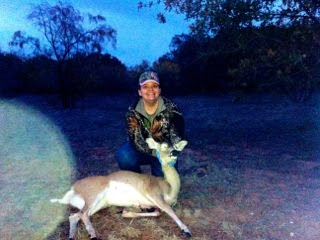 Susan Griffith
Forth Worth, Texas
"Dad has always had guns and hunted. I never really was into it. Met my husband in 2003 and hated going to the ranch with him! I did NOT like being dirty, no showers, no real toilets at camp, spiders and snakes... we even lost our bed to a skunk one trip out and that was it for me! Hunting was HIS sport for all I cared. Fast forward to Christmas 2010. Hubby got me my first rifle for Christmas. A Weatherby .243 youth model complete with Zeiss scope and Pink Camo carrying case! What's a girl to do... I went out and bought myself some hunting gear so I could be head-to-toe camo, and set out to learn to love hunting. Back then, I was a heavy girl and tracking all over Gods Kingdom (West Texas) was NOT my cup of tea. September 2011, I underwent gastric Sleeve Surgery and lost a lot of excess baggage. So last deer season I was ready to go! Went out on my own after tracking along with my hubby that day and settled in a blind near one of our feeders. It was nearing dusk and I knew this was my last chance this weekend. If I was going to get something, this was it!
Two doe approached the feeder and I got my sights on one. After waiting for just the right shot, I took a deep breath and BANG! Got her! she ran off to the side and I took aim again realizing the second deer had stopped right near by... I wanted to get the second one, too, but the first was hit but still standing, and I couldn't let her suffer. Shot once more at the first doe and the second was gone." 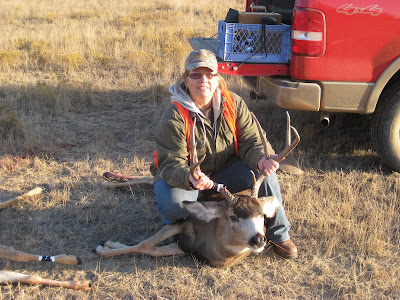 Elaine Dahl Egeland, Montana
"I love to hunt and my husband loves to take me out. This buck was taken in Eastern Montana with a 22.250. I've been hunting 35 years."
Jennifer Potts Hutchens Alabama
My husband and I married October 8th, the week before deer season opens here in Alabama! He bought me a new Mathews Bow for a wedding gift and told me if I wanted to see him during hunting season then I better learn how to shoot it! Who knew that not only would I "learn how," but I love it and left him home with the kids a few times so I could go when we couldn't both go! Thank you Jeff for teaching me your passion! I love you, and I'm glad we get to share it together!

We eat all of our deer meat. We love the sport but also good healthy meat for us and our 3 children! Nothing like fresh deer jerky! Can't keep it made fast enough. And our families like when they come over to hit our deer freezers!" 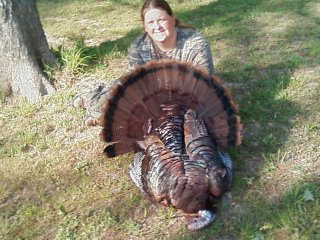 
Again, thank you to all those who contributed. You're all beautiful!!
Labels: Local