A Prairie Home Companion with Garrison Keillor... and Martin Sheen!

It was nice to get out last night, to see A Prairie Home Companion with Garrison Keillor at the Hollywood Bowl. It's been very humid and overcast here. We wondered if it would rain. It did two days ago, which is strange for SoCal in the middle of July. During the show, Garrison joked that rain in July in California is like breaking some kind of sacred law. But Rick is odd. He has been sporting a silly grin on his face all week, just because the weather reminds him of Nebraska in the spring. Of course, we sat in the nosebleed section, but that's ok. No matter where you sit, the Hollywood Bowl amphitheater is an enjoyable experience. 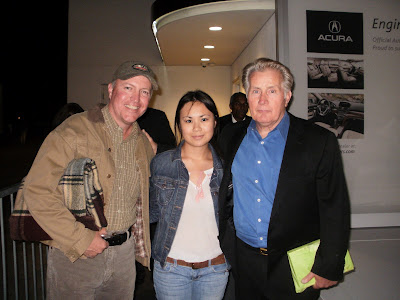 We even met Martin Sheen! Who just happened to be the guest appearance on Mr. Keillor's show. Rick and I hung around after to wait for the traffic to clear, and Mr. Sheen came walking out the back. See? It pays to be patient. I'm not the kind of person who gets star struck, but it was still cool to meet him. Yeah, we're getting ahead of ourselves here, but we thought we'd lead with this.
Let's backtrack a little.
The Hollywood Bowl is probably my favorite place to see a show, especially in the summer. We arrived early to have a picnic. The grounds is conveniently surrounded by picnic areas. 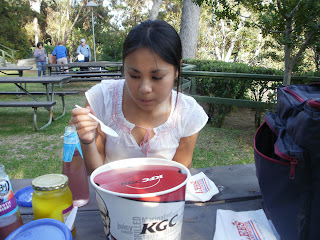 You can't have a picnic without fried chicken! Rick also made his mom's famous potato salad, which was perfect for yesterday. 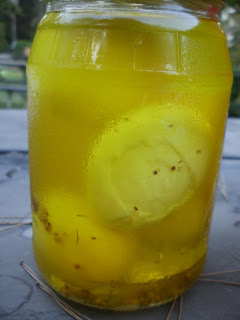 We love having pickled eggs, which we made with leftover pickle juice. Rick's cousin's Pete shared this idea with us the last time we were in Nebraska. The best juice to use is from bread and butter pickles. Boil some eggs, peel them and stick them in the juice. Then refrigerate for at least 2 weeks. Delicious!
Rick thinks the egg looks like it has a face on it... 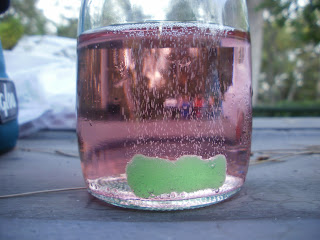 I decided to drop a Sour Patch Kid in my wine cooler. I have to admit, it was kind of disgusting.  But, it looked cool. 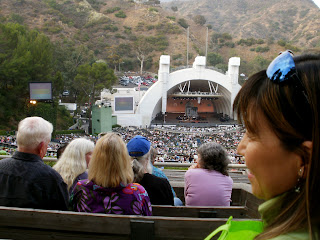 This is where we sat. Hahah! But the weather was great. It was like sitting at the park, in the warm summer night's air. Rick and I watched the seats fill up while waiting for the show to start. The Hollywood Bowl can seat 18,000 people! 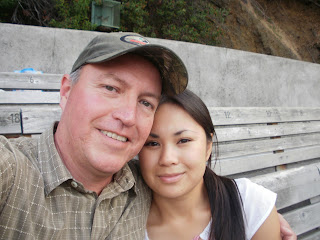 Happy couple!
Rick grew up with Garrison, and in a way, I did too. I used to watch his show on public television when I was little. I don't remember any specifics, but what I do recall is Garrison's warm, down-home voice, wry humor, spontaneity and great music-- which is a mixture of bluegrass, folk and gospel. 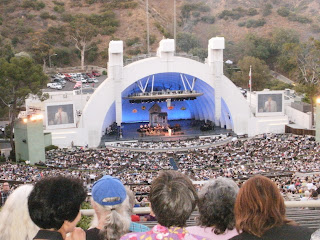 Then the show started! Everyone stood up as Garrison Keillor and bluegrass singer Sara Watkins came down the aisle singing "America, the Beautiful."
For the rest of the evening, Garrison and his pals took us on a trip to the strawberry and rubarb gardens of Minnesota (his home town), a ride through the spaghetti westerns of Hollywood, and to faraway lands like Ireland and Africa. 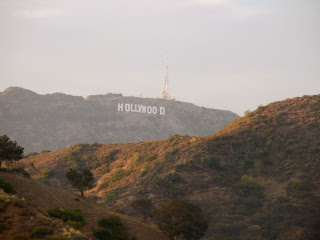 From where we sat, we could see the Hollywood sign behind the stage. Garrison cracked some great California jokes, which were delightful and refreshing.
This was Rick's first time being at the Hollywood Bowl, and he enjoyed it thoroughly. If you get the chance, come see a show!
Labels: Destinations Local Media